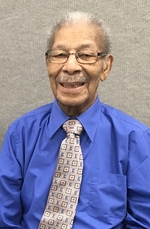 Master Sergeant Ford enlisted in the Army in 1943 and served in France, Belgium, and England during World War II. He was involved in the logistical support of the Allied Forces D-Day Invasion of Europe. Sergeant Ford served in Greenland during the Korean War, and earned three Bronze Stars in Southeast Asia during the Vietnam War.

He retired from Aberdeen Proving Ground in 1970. He spent another thirty years as a civil servant for the Veterans’ Administration at Perry Point V.A. Medical Center in Perryville, Maryland.
Mr. Ford was a mechanic and life-long tinkerer who loved taking apart and putting back together anything. He loved jazz and blues, playing cards, good bourbon, bad westerns, and his family,,,,,and especially Pattie F. Ford.