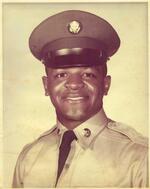 He was known by everyone as “Paige” throughout his childhood and adult life. He was educated in the Harford County Public Schools, beginning his primary and middle school years at the Havre de Grace Colored School. He completed high school at the Havre de Grace Consolidated School in 1956 and later graduated from Morgan State College, Baltimore, Maryland in 1961.

He enjoyed his hometown and could often be seen working along with his father “Mr. Denny” at Seiberts Grocery Store. He enlisted in the United States Army and serve for two years. He returned to Maryland and began a 35-year career with the Maryland Department of Employment and retired in the year 2000. He was a lifelong member of St. James AME Church (Green Street).

Paige had many friends and enjoyed most sports especially track and field events and baseball. He was a regular at the yearly Penn relays with his hometown friends.

As a youngster he loved to dance and enjoy the old “Rock & Roll” music. He was a “natty” dresser and enjoyed his wingtip shoes and starched and creased khaki pants. Paige was the light and life for his family especially his dear first cousin Annie (Sissy) Norris.

He was preceded in death by his parents; and recently on January 28, 2021, his only brother Howard “Flick” Dennison.