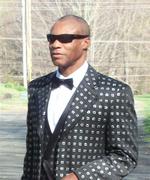 Richard Martin Clark, born August 15, 1944 to the late Julie Martin and raised by Charles & Irene Clark in Port Deposit, Maryland. He departed his earthly journey on August 27, 2019 at home.

Affectionately known as Daddy Rich, Fox, Pop and Pop Pop, Richard received Jesus as his Lord and Savior at a young age and as Jesus drew him closer, he enjoyed their personal relationship and time together. Richard received early education at George Washington Carver High School in Elkton, Maryland. He learned carpentry and became skilled in master Craftsmanship building homes, making furniture, as well as electrical and plumbing.

Richard was employed at Bainbridge Naval Training Center as a pipe fitter until transferring to Aberdeen Proving Ground, Maryland. He retired from Aberdeen Proving Ground, Maryland as a facilities Engineer where he consistently used and sharpened his skills in masonry, telephone circuitry, HVAC, and roofing. After his retirement, Richard formed his own construction company for many years with the challenges of building something from nothing.