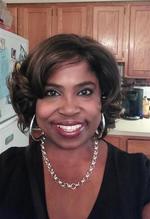 Lynn Valencia Lee was born on January 1, 1970 at Harford Memorial Hospital, Havre de Grace, Maryland. She had the distinction of being the first baby born in Harford County on New Year’s Day at 2:30 a.m.

Born to John Theodore Lee, Sr., and Edna Joyce Roundtree Lee. She transitioned from this life after a lengthy illness at University of Maryland Medical Center in Baltimore, Maryland. Special Recognition - Lynn was an organ donor, and an Organ Donor Medal of Honor was given to her children from the Organ Donor Foundation of Maryland.

She loved music and began singing at an early age with the Belvedere, Delaware Shining Stars of Gospel Tabernacle Church, Belvedere, Delaware. Later in her early teenage years she sang with the United District Council and the General Convention Choirs of P.A. of C. of J.C.

After completing her education, she traveled to California where she worked and lived for a short period of time with her sister, the late Annette Roundtree Bassey (Bruce). Upon her return to Maryland, she completed other courses of education and received specialized training in the Hospitality Customer Service Industry.

She would later move to Richmond, Virginia where she worked for some eight years. She later met and married Ralph Kennedy Archer of Richmond, Virginia. Their marriage was officiated by Bishop Roger Tatuemof Helping Hands Ministries. They became member and worshipped for years. From this union of marriage are three children, Quinton, Kendyl and Lynniah.

Lynn would spend her entire adult life working in the Hospitality Customer Service Industry and was employed at the Chesapeake Holiday Inn Corp, Aberdeen, Maryland up until the time of her illness and finally retired on disability in 2015.