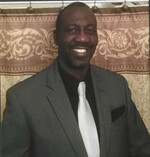 Johnnie Dallas, Jr. was born October 31, 1955 to Olivia Dallas and Johnnie Dukes of Paxville, South Carolina. He took his rest from this life on Saturday, December 19, 2020 at Univ. of MD Upper Chesapeake Health in Bel Air.

Johnnie was educated in and employed in Baltimore City. He attended PS #113, Booker T. Washington Middle and graduated from Baltimore City College in 1973. He pursued further education at both CCBC and MD Institute College of Art. He was employed by Union Memorial Hospital and later retired from the Department of Public Works in 2014.

Johnnie loved golfing and he continued using his many talents by serving people in the community. He mentored youth and coached sports for Harford County Parks & Recreation. As a member of Zion Temple Church in Edgewood, he joyfully served in many roles alongside his Pastor and friends.

Johnnie served his Lord and Savior well by warming hearts with a consistent cheerful smile and funny jokes. He has made his mark on this world and will truly be missed.