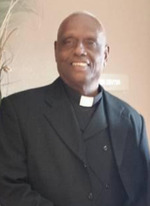 Elder Jesse Lee Hampton Sr. was born on December 8, 1938, in Winston Salem, NC. He
was the son of the late Mr. Jesse D. Hampton and Mrs. Lossie M. Hampton. He was one of seven children. Elder Hampton attended Winston Salem High School. In later years he
received his High School Diploma with honors from Stratford Career Institute in Maryland.

Elder Hampton moved to Maryland in 1959, where he met and married Eleanora Bond- Hampton. They were married for almost 44 years. Together they had five children and abided in a loving marriage until the Lord called her home on August 21, 2003.

Elder Hampton was employed with the federal government at several locations, including
Aberdeen Proving Ground Army Base in Aberdeen Proving Ground, MD, Bainbridge Naval Base in Bainbridge, MD, and Perry Point VA Hospital in Perry Point, MD, where he retired in 1992. He also held several part-time positions, including Harford Memorial Hospital in Havre De Grace, MD, and Perryville Elementary School in Perryville, MD.

In 1995, Elder Hampton relocated to Anniston, Alabama (AL) with his former late wife, Eleanora Bond- Hampton. He became a member of Greater New Day Apostolic Church under the leadership of Bishop Vernon Presley.

Elder Hampton received his license as a minister under the Pure Holiness Organization. He joined Peter’s Rock Holiness Church under the leadership of Dr. Marvin Crowe, where he was ordained an Elder in the Lord’s church. As an Elder, he preached and taught the Adult Sunday School Class. He was well known for his Sermon, “It’s A Hard Saying.” Elder Hampton met and married Evangelist Louretta G. Peoples. To this union, they brought together eight children, eighteen grandchildren, and three great-grandchildren. In 2014, the Lord spoke to them to establish their own church, St Peter’s Ministry, Inc., under the affiliation of the Pentecostal Assemblies of the World, Inc., Ninth Episcopal Diocese of Alabama where Bishop George F.
Austin is the Diocesan. Elder Hampton served as an Associate Pastor and led many souls to
Christ, baptizing many new converts in the name of Jesus, teaching them how to live a sanctified life, and the importance of being filled with the gift of the Holy Ghost.

He taught Adult and Children Sunday School and Bible Classes. He also attended the
Alabama District Council Institute and received his Certificate of Completion for Introduction to Ministry 101. He was a prayer warrior and highly respected amongst his peers and began receiving requests to give sermons at associate churches.

Elder Hampton enjoyed golfing, football, tennis, swimming, landscaping, detailing automobiles,
watching biblical movies, reading, and studying the Bible. His daily life embodied the following
scriptures: Joshua 24:15, “As for me and my house, we will serve the Lord”, Acts 2:38 “Then Peter said unto them, repent and be baptized every one of you in the name of Jesus for forgiveness of sins, and you shall receive the gift of the Holy Spirit; and Acts 2:40 “…Save yourself from this crooked generation”. His favorite songs: “Jesus You’ve Been Good To Me” and, “Jesus is the Light.”