Obituary for Helen A. Thompson 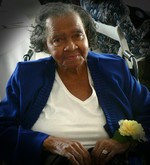 Helen Alphagean Thompson departed this life on Thursday, August 8, 2019. She was born in Sparta, NC on February 12, 1923 to the late Curtis Andrew and Eva Mae (Choate) Thompson. She was the beloved wife for 44 years to the late James Lawrence Thompson, Sr.

Helen had retired after many years as a Para-professional for the Cecil County Public Schools. She was a faithful member of Mt. Carmel Baptist Church in North East, MD. Helen was the matriarch of her family and was a caring person to many people.

Messages of condolences or sharing may be made to www.lisascottfuneralhome.com