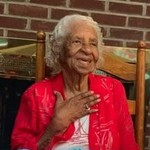 As a young adult she worked as an Officer Driver at Aberdeen Proving Ground during the Korean War. Later, she met and married Bernard Christy, Sr. and together they built a home and a family of seven children.

Marie loved to travel, often taking trips with the Lucky Ladies travel group or with her family. She enjoyed photography and was an avid gardener; often making dishes from the vegetables in her garden.

Marie always expressed pride about being able to make bread at the age of 90 years old.