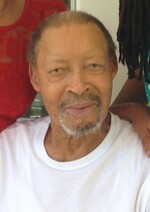 GEORGE SMITH, son of the late Rosa Smith was born on July 20, 1931 in Dinwiddie, Virginia.

He was raised in Dinwiddie, Virginia. He received his education in the Dinwiddie, Virginia School System where he later graduated. He was extremely intelligent, an ALL AROUND people’s person, a likeable man with a great sense of humor and such a BEAUTIFUL soul. He will TRULY be missed by so many people.

He was in the United States Army and worked hard and was employed with Aberdeen Proving Ground as a Supply Technician and later retired after 40 years of service. George was an outgoing and loving person, brother and father who ALWAYS enjoyed family time and he loved playing his gospel music.

He was preceded in death by his mother Rosa Smith, a brother Clarence Smith and a sister Mary Golden.