To share your memory on the wall of Erva Price, sign in using one of the following options:

Print
Mrs. Erva Price was born on March 30, 1929 to the late Harry and Vannie B. Harris in Reidsville, NC. She went on to be with the Lord on Saturday, July 11, 2020 at Harford Memorial Hospital in Havre de Grace, Maryland.

On labor day in 194... Read More
Mrs. Erva Price was born on March 30, 1929 to the late Harry and Vannie B. Harris in Reidsville, NC. She went on to be with the Lord on Saturday, July 11, 2020 at Harford Memorial Hospital in Havre de Grace, Maryland.

On labor day in 1947, she married William McKinley Price in Reidsville, NC. They moved to Aberdeen, MD in 1959 where they raised their six young children.

Erva worked for over 20 years on Aberdeen Proving Grounds where she was loved by her colleagues and many of the customers she served. She was a hard-working, outgoing, lovable person who enjoyed music, dancing, going to the movies and gardening. She was always so very proud of her flowers! Erva also loved the Lord and often reminded us that "God sits high and looks low." She lived out loud and spoke her mind regularly and candidly. When her health started to decline, she moved into Calvert Manor in Rising Sun, MD where she was lovingly cared for from February 2008 to October 2015. In an effort to be closer to immediate family, she was transferred to Citizens Care Center in Havre de Grace, MD where she was lovingly cared for until her passing.

She spent her final days with her only daughter who loved her through to her transition. Erva's will was strong, like her mother's, and she spent the last moments in this world, as she would say, "kicking, but not high."

Erva adored her family and the feeling was mutual. She was affectionally referred to as "bugga" by her grand and great-grand children and created so many unforgettable memories for all of us. Her spirit will live forever in our hearts. She enjoyed an incredibly special and close relationship with her only sibling, Delores Hill. They visited and talked to each other on the phone regularly and traveled together often to spend time family. Alas, they are together again.

She was preceded in death by her first daughter, Constance, her parents, her husband, her sister and twin sons.
Read Less

To send flowers to the family or plant a tree in memory of Erva Price (Harris), please visit our Heartfelt Sympathies Store.

Receive notifications about information and event scheduling for Erva

We encourage you to share your most beloved memories of Erva here, so that the family and other loved ones can always see it. You can upload cherished photographs, or share your favorite stories, and can even comment on those shared by others.

Posted Jul 16, 2020 at 03:10pm
Wishing you peace to bring comfort, courage to face the days ahead and loving memories to forever hold in your hearts. We will always miss Muah! 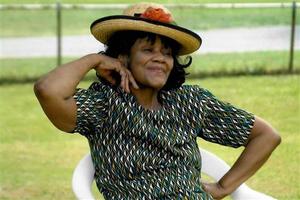