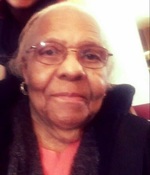 Ernestine Divers McLain was born on May 20, 1929 in Cooptown, Maryland, to the late Clara Divers Cox. She passed away at her home in Edgewood, Maryland on March 4, 2021.

Raised at Fairview AME church from birth, Ernestine was a member there until after her marriage to Cornelius "Country" William McLain in 1951. She then transferred her membership to St. James UAME church, where she and Country raised their four children.

As a child, Ernestine attended Fairview School which was held in the parsonage of the Fairview AME Church on Highpoint Road in Forest Hill, MD. She continued and completed her education at Bel Air Colored School on Haines Street in Bel Air.

Ernestine was a talented homemaker who also worked outside the home. She was proficient in home canning and liked making home cooked meals from scratch for her family. She retired from C- Mart in Forest Hill to become the main caregiver for her husband and her mother during the final days of their illnesses.

Ernestine was an avid reader and especially loved Danielle Steele. She enjoyed doing word search puzzles and while still mobile, could often be found at Bingo or with the Samaritan Culturettes.

She was predeceased by her husband Cornelius ”Country” McLain and son Cornelius “Junebug” McLain, Jr.