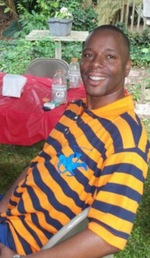 EDDIE THOMAS WHITFIELD JR. was born on November 1, 1965, as a twin brother to Edwina Tammy
Whitfield, and to the parents of the late Eddie T. Whitfield Sr. and Claudia (Williams) Whitfield. He
departed this life on Wednesday, December 19, 2018, at the age of 53.

Eddie graduated from Havre de Grace Senior High School in June of 1984. After graduation he
became a full-time employee as a cashier/manager at the ACME Markets (Havre de Grace, MD) for
over 21 years.

Eddie gave his life to Christ at an early age and was an active member of St. James A.M.E. Church
for over 40 years. He loved to sing; it allowed him to praise and worship the Lord through the music
ministry. Eddie sang on the youth choir and the young adult choir. He later joined the Vernon Sewell
Ensemble in May of 1980, when the choir was formed. He served as a class leader and was on various
church committees. His faith was steadfast and he was not shy when he told others about the
goodness of the Lord.

Eddie was kind and very personable. Those who came in contact with him loved his friendly and
outgoing personality. He lit up the room with his smile. His snarky remarks and facial expressions
brought his family and friends joy and laughter. Eddie was affectionally called Dee Dee by his twin
sister Edwina, Floyd by his brother Kevin and Jun, Junior and Ed by close family and friends.

Eddie had a love for fashion, dancing, traveling and cooking. He was known for being well groomed;
he was awarded best dress during high school. Eddie took pride in how he looked and loved to collect
and wear designer cologne. He loved to dance and he took every opportunity to hand dance with his
mother; they captivated the audience with their dance steps. When he traveled, he returned and told
fascinating stories about his adventures. Eddie made everything seem grand. His cooking was the
staple that held his family together. His love of the culinary arts was inspired by his father and his Aunt
Marge. Just about everything Eddie cooked was made from scratch and he only shared his recipes
with a few.

He was preceded in death by his father Eddie Thomas Whitfield Sr. and his niece, who was also his
goddaughter, Brittany Grace Donaldson.