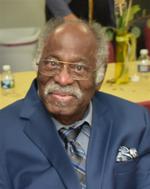 Dawson (Dossie) Lee Burnett’s life is filled with “FIRSTS”. Born September 28, 1929 in Camden, Arkansas, he is the first offspring of Amanda Burnett Carter who later gave birth to two more sons - Howard (Carter) Burnett, Jr. and James Edward Carter. He is the first grandchild of William and Caroline Carter Burnett who raised him.

When Dossie’s mother married in October 1930, his grandparents retained guardianship. He credits their love, strict upbringing, and personal example for teaching him right from wrong. No wonder, since his grandparents were insistent on raising him in the church. They themselves eventually served as a deacon and deaconess at St. Paul Baptist Church, Ft. Wayne, Indiana. Dossie is a member of Mt. Zion Baptist Church, Havre de Grace, MD.

PEEWEE was Dossie’s nickname while growing up and many around him did not know his real name. In fact, it was discovered after his grandmother’s passing when his birth certificate was found among her possessions that his real name was Dawson - after his great-grandfather, Dawson Burnett.

Dossie graduated high school, 4th in his class of 54 students and received 4 letters while playing football and basketball. After high school he joined the Army.

Dossie was a soldier in one of the first Negro army units to integrate the army during the Korean War. He recalls that his unit was stationed in Japan when the Korean War started. The American soldiers in Korea needed help and his unit was the nearest American unit that could quickly give assistance, so they were deployed to the war zone with no weapons to defend themselves. Camping in a riverbed, one night they were given orders to immediately move to higher ground for safety. They traversed the dark jungle (mind you they still have no weapons) and came to a point where they were told to turn around and go back. Later his unit learned they had been turned around at the North Korean border (the DMZ). Dossie served 3 years, 9 months and 21days (Truman Year) receiving an honorable discharge as Corporal (promotable).

After the military, Dossie attended Hampton Institute graduating with the Class of 1956, having earned his bachelor’s degree in Accounting. While attending Hampton Institute he played football for two and half years.

He was also among the FIRST Black professionals to integrate the civil service beginning his career at Erie Army Depot near Port Clinton, Ohio. During its closing, he worked in private industry for Owens Illinois during the day and part-time at night at the depot. He returned full-time to civil service November 1, 1966 as Chief of Reports and Analysis Section in the Cost Accounting Branch, Aberdeen Proving Ground, MD. In 1982 he was assigned as Chief of the General Accounting Branch where he remained until his retirement August 1995 as a Deputy Defense Accounting Officer and Chief of Accounting Division.

Dossie met Betty Lou Tharp- the woman who would win his heart- in Fort Wayne, Indiana. According to Dossie, she planned their FIRST meeting. According to others, Dossie met Betty on a pre-arranged blind date at a Duke Ellington concert. Betty was not the blind date but the companion of his blind date. Dossie and Betty were married September 4, 1954 and gave birth to “The Twins “- Dorsey Duane (deceased 1976) and Deborah Denise (Thomas Arrington), Virgil Leon and Jocelyn Fane’ (Jerome Parham). Dossie admitted that he may have not said it enough, but he loved his children.

Dossie holds membership in the Alpha Phi Alpha Fraternity, Incorporated Iota Lambda Grad Chapter and has faithfully maintained his membership in good status. He was a member of the Masons, and a life member of both the NAACP and American Legion.

Dossie held dear, his fond memories of helping to raise his grandchildren Ayana Burnett, Charles (CJ) Sabino III, Jazmyn Sabino, Michael Parham, Jerome Parham, and great-grandson and namesake Dawson Burnett-Paul. He was that stoic family member who said he never planned out his life, but the Good Lord worked things out so well for him. He felt he lived a very full life and leaves to cherish the memories of him in addition to those already mentioned grand-daughter-Destiny James, great-grandchildren- Spirit Burnett, Cenislee (Leelee) Sabino and Jocelyn Young, nephews, nieces, and other relatives and friends.