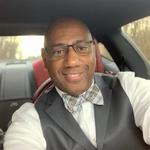 Demont Edward Strand was born on September 24, 1967 to the late James Ernest Strand, Sr. and Mildred V. Martin in Havre de Grace, Maryland. He was raised by his mother and his stepfather, the late Jerry Lee Martin. He entered into glory on Sunday morning, March 24, 2019 in College Park, Maryland at the age of 51.

Demont received his education in Aberdeen, Maryland and later graduated in 1985 at Hartford Vo-Tech studying Architecture and Drafting. He attended the University of Maryland and studied Accounting. He also served in the United States Air Force. He was united in holy matrimony to Anita JoLynn Robinson on August 17, 2008 in Pasadena, Maryland.

He gave his life to Christ and was baptized in 1980 at Union United Methodist Church under the pastorship of Reverend Dr. Alfred A. Vaughn.

After advancing his education and serving in the military, Demont gravitated to the world of business and sales. For a period of time, he was the owner of his own window tint shop called Strand Tint and later moved into the automobile sales industry within the DMV area. It was evident his passion for cars and sales savvy would be the combination that would excel him to many career highs in the industry. Beyond a shadow of a doubt, his favorite past-times were his cars, motorcycles, boxing, and his beloved Washington Redskins.

Demont was preceded in death by his grandparents, Herman and Margaret Strand, Lloyd and Francis Cain and godfather, Leroy Stansbury.