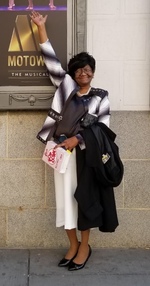 Deborah Wilson Johnson affectionately known by most as “Debbie” was born September 7, 1958 she departed this life on December 25, 2018 in her daughters home in Essex, MD. She was the seventh child born to George and Mary Osborne Wilson.

She was joined in holy matrimony to Alonzo Floyd Johnson on July 6, 1991. Debbie was a very hard worker helping her husband to support their family. She held various jobs throughout her life, just to name a few she was employed by Bata Shoe Company, Lorien Nursing Home, Bel Forest Nursing Home, Harford County Public Schools, Sephora, Saks Fifth Avenue and the list goes on and on until her health would no longer afford the opportunity to work outside of the home.

Debbie attended Harford Community College and earned Certification as a Nurses Assistant. She was a faithful member of the church where she was reared, Mount Calvary UAME church which she loved with all her heart and soul. Debbie was not only a member of her church but she worked in the capacity of Superintendent of the Sunday School Program, a Missionary of the church, Director of the children’s choir and served on other choirs as well. Debbie loved people but fondly loved the little people most of all and would do whatever she could to devote her time and attention to the children. It was nothing for her to pile children in her car (along with Jeff Shivers) making several trips to ensure the children came to Sunday school to help start the foundation for their Christian path.

Debbie’s giving spirit and her gift of being a social butterfly easily allowed her to reach out to those in need to provide comfort with a smile in a way that only she knew how. Her children have a difficult time remembering when their Mother was NOT there for them because she always attended sporting and drama events, from the time they were in Parks and Rec to their college years. She was very proud of them and their skills and everyone knew her children were playing from all of the sideline cheering should would do so loudly.

But not only were the cheers that came from Debbie for her children but they were for any other child that was playing as well. Debbie was very proud of her Grandchildren and loved them dearly she tried to spend as much time as she could with them. Each Grand had their own special relationship with her. Debbie also held near and dear to her heart her annual Gospel Cancer Concerts to raise awareness for cancer research and bringing everyone together through praise and worship.

She was preceded in death by her sisters Doris Edwards and Carolyn Hawkins, and brother Charles Curtis Wilson.