Print
Catherine (Clyde) Smith Coleman, was born on August 14, 1948 to the late Essie Lynn Edwards Smith and Preston Nicholas Smith in Bel Air, Maryland. Catherine, who was one of 11 children, departed this life peacefully surrounded by her beloved family on November 13, 2018. She was born and raised in Harford
County, Maryland.

She received her education at Central Consolidated School in Bel Air, Maryland. Catherine always displayed a need to help others which led her to obtain a certification in nursing at Harford Community College. After becoming a Certified Nursing Assistant (CNA), she devoted herself to helping the elderly while employed at MacPhail Nursing Home, Bel Forest Nursing Home and Citizens Nursing Home. Catherine also worked at the Ball Park Diner as a cook, Brownies Hotel as Housekeeping, and as a sorter for the GAP, Incorporated.

Catherine attended Clark's United Methodist Church as a young child. She later went on to accept the Lord as her personal Savior at Rays Temple in Baltimore Maryland. It was there that she received the Water Baptism and the infilling of the Holy Ghost giving birth to her prayer and servant ministry. Catherine later moved her membership to Zion Temple Apostolic Faith Church under the Pastoral Leadership of Dr. L. Lamont Turner in
Edgewood, Maryland.

Clyde as she was affectionately called, was a true Prayer Warrior. If you coughed she would be at your side praying for your healing. If you were fortunate enough to share a hospital room with her, she would pray for you, your spouse, kids, parents, grandparents, dog and cat if necessary. It did not matter the color of your skin, your age or severity of the illness, Catherine would see a need and pray for all whether at home, at the grocery store in line or while in the hospital.

Clyde has demonstrated the gift of servitude by every choice in her life. As a servant and woman of God she would give you her last, whether it was money, food, clothing, or a place to lay your head. Some referred to her as "Bea Gaddy." She was loved and referred to by so many people as their adoptive mother, grandmother and aunt.

Clyde loved knitting, crocheting, decorating for the holidays and spending time with family and friends. She was known for her marsh mellow sweet potatoes, meatballs and baked macaroni and cheese. Clyde was the sole caregiver for her late mother, Essie Lynn Edwards Smith for 11-12 years. Clyde's family meant the world to her and she loved them unconditionally. She phoned her children and siblings several times a day just to talk, share a story, laugh or pray for them.

Although, she never missed an opportunity to tell you what she thought or how she felt, her warm and kind spirit will greatly be remembered amongst those she called family and friends.

We encourage you to share any memorable photos or stories about Catherine. All tributes placed on and purchased through this memorial website will remain on in perpetuity for future generations.

TW
I Love You Grandmom Clyde. You will never be forgotten and I will make sure that your Grandkids especially Kalani remember you and know how Strong you were. Love You Always.
Tamara Wanzer - Wednesday November 21, 2018 via Condolence Message
Share This: 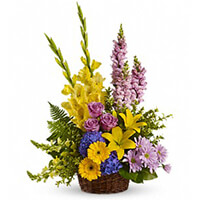 We will miss you Catherine (Clyde) and we love you.
John&Dorthea Bridgest: Henry, David & Agnas Mack - Sunday November 18, 2018 via Heartfelt Sympathies
Share This:

JB
To The Smith Family: We morn with you and pray for you in the lose of "Clyde". We also know she is in a better place with her Dad, Mom and love ones without pain in the house of Jesus.

To The Children and Grandchildren: We pray your hearts will mend but never forget the little things, the good times, the smiles and trying times. Your Mom & Grandmother will always be with you.

Thank you for sharing!

Provide comfort for the family by sending flowers.

Or use your email:

Add Photos
There are currently no photos. Click here to share your photos.
Send flowers to the family
Choose from beautiful standing, table and basket arrangements. Safe and secure online ordering.
View Flower Arrangements
What has already been purchased for the family?
Place a Donation
Choose from a Family Preferred Charity or select your own.
Place a Donation
Subscribe to Updates

Connect with families at their time of loss. By subscribing to email updates, you will receive two daily updates containing all new stories, photos, candle lightings, condolences, and more.