Obituary for Bruce A. Stovall 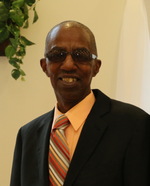 Bruce A. Stovall was born on April 12, 1952, to the late Mary Stovall and Theodore Scott in Baltimore, Maryland. He departed this life at his home on October 24, 2019, after a short battle with an illness.

Bruce received his formal education in the Baltimore City Public School System. In 1971, he joined the United States Marine Corps, where he served for two years. In 1980, he joined the U.S. Army National Guard, serving a deployment in Kuwait from 2004–2005. In 2012 he retired from the national guard as a heavy equipment operator.

In addition to his military career, Bruce was employed at the Internal Revenue Service as an administrative clerk and retired in 2012 after 41 years of service. We still don’t know if he was working hard or hardly working.

Bruce was united in holy matrimony to Mary Brooks on October 14, 2017, after a very long courtship. Bruce was very passionate about CB radio, and was known to his listeners as “Dr. Love.” He would sit for hours and talk to people locally, as well as overseas. Bruce had a soft spot for children and was beloved by many children in his neighborhood and church.

Bruce started his walk in Christ in 2014 and joined Holy Temple Holiness Church of Deliverance. He loved coming to church to help wherever he was needed. He served as an usher and helped with the maintenance of the multipurpose center. There was never a dull moment around Brother Bruce.

Bruce was preceded in death by his parents, Mary Stovall and Theodore Scott; his grandfather, James Stovall, Sr.; his son, Maurice Stovall; his brother, Brecke Stovall; and his sister, Deborah Stovall.