To share your memory on the wall of Bruce Stovall, sign in using one of the following options:

Provide comfort for the family of Bruce Stovall with a meaningful gesture of sympathy.

Print
Bruce A. Stovall was born on April 12, 1952, to the late Mary Stovall and Theodore Scott in Baltimore, Maryland. He departed this life at his home on October 24, 2019, after a short battle with an illness.

Bruce received his formal educa... Read More
Bruce A. Stovall was born on April 12, 1952, to the late Mary Stovall and Theodore Scott in Baltimore, Maryland. He departed this life at his home on October 24, 2019, after a short battle with an illness.

Bruce received his formal education in the Baltimore City Public School System. In 1971, he joined the United States Marine Corps, where he served for two years. In 1980, he joined the U.S. Army National Guard, serving a deployment in Kuwait from 2004–2005. In 2012 he retired from the national guard as a heavy equipment operator.

In addition to his military career, Bruce was employed at the Internal Revenue Service as an administrative clerk and retired in 2012 after 41 years of service. We still don’t know if he was working hard or hardly working.

Bruce was united in holy matrimony to Mary Brooks on October 14, 2017, after a very long courtship. Bruce was very passionate about CB radio, and was known to his listeners as “Dr. Love.” He would sit for hours and talk to people locally, as well as overseas. Bruce had a soft spot for children and was beloved by many children in his neighborhood and church.

Bruce started his walk in Christ in 2014 and joined Holy Temple Holiness Church of Deliverance. He loved coming to church to help wherever he was needed. He served as an usher and helped with the maintenance of the multipurpose center. There was never a dull moment around Brother Bruce.

Bruce was preceded in death by his parents, Mary Stovall and Theodore Scott; his grandfather, James Stovall, Sr.; his son, Maurice Stovall; his brother, Brecke Stovall; and his sister, Deborah Stovall.
Read Less

To send flowers to the family or plant a tree in memory of Bruce A. Stovall, please visit our Heartfelt Sympathies Store.

Receive notifications about information and event scheduling for Bruce

We encourage you to share your most beloved memories of Bruce here, so that the family and other loved ones can always see it. You can upload cherished photographs, or share your favorite stories, and can even comment on those shared by others.

Angela, Aaron and Saniya Mason sent flowers to the family of Bruce A. Stovall.
Show you care by sending flowers

Posted Nov 03, 2019 at 09:52pm
Sis. Mary, I want to say Thank you for always allowing bro. Bruce to help me whenever I had a event. Bro. Bruce was the kindest man I've met here in Baltimore. He has never been offensive to me. Always had something funny to say. You're gone bro. Bruce but you will never be forgotten. The Walker Family loves the Strovall family. God bless
Comment Share
Share via:
DC

Posted Nov 01, 2019 at 09:37pm
I want to say thank you Brother Bruce for always being such an UP spirit. Whenever I saw you, you were always joking and laughing about one thing or another. Your happy spirit helped me keep a joyful demeanor as well. I want to say thank you also for being a GREAT help to my mother, Prophetess Walker during the ministry work performed to uplift and bless the community. I further appreciate you being so nice to my Son. He always knew you would play around and give him candy I had once forbidden him from having lol. I never really minded anyhow, your spirit meant well. I will keep you remembered always with us, and you will truly be missed. Love you Big Bro.
Comment Share
Share via:

Posted Nov 01, 2019 at 03:54pm
Etta and Family,
Dear cousin your time that you share with Bruce always remember all your good times and his love that he had for you and your family. His kind,laughner and love spirit that he carry with him all times made him someone that you would want as a friend ,husband and family member. He surely will be missed by all that knew him, he is now your angel that will be hovering from above , that beautiful light that you see will be Bruce watching from Heaven.

Posted Nov 01, 2019 at 01:55pm
Mrs. Etta, Sharonne, and family, please accept our condolences. We are thinking of you all at this time. Love always, Jamie, Darlene, and the girls.

Medium Dish Garden was purchased for the family of Bruce Stovall. Send Flowers

Posted Oct 31, 2019 at 10:30am
You are now an angel looking over us. Rest easy Uncle Bruce . We love you and will miss you. With love from Angela, Aaron and Saniya Mason 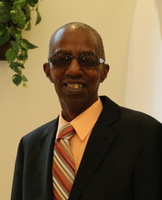