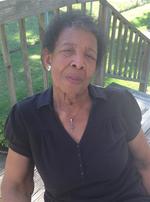 ANN MAE SMITH was born on February 25, 1935 in Darlington, Maryland to the late Stanton and Serina Akins-Webster. She departed this life at her home on September 7, 2020 in Havre de Grace, Maryland.

She was united in holy matrimony to George Smith on February 22nd. From this union one child was born. She received her education in the Harford County Public School System.

Ann was employed with the Aberdeen Proving Ground as a custodian and later retired after 40 years of service.

She loved cooking, shopping and spending time with family.